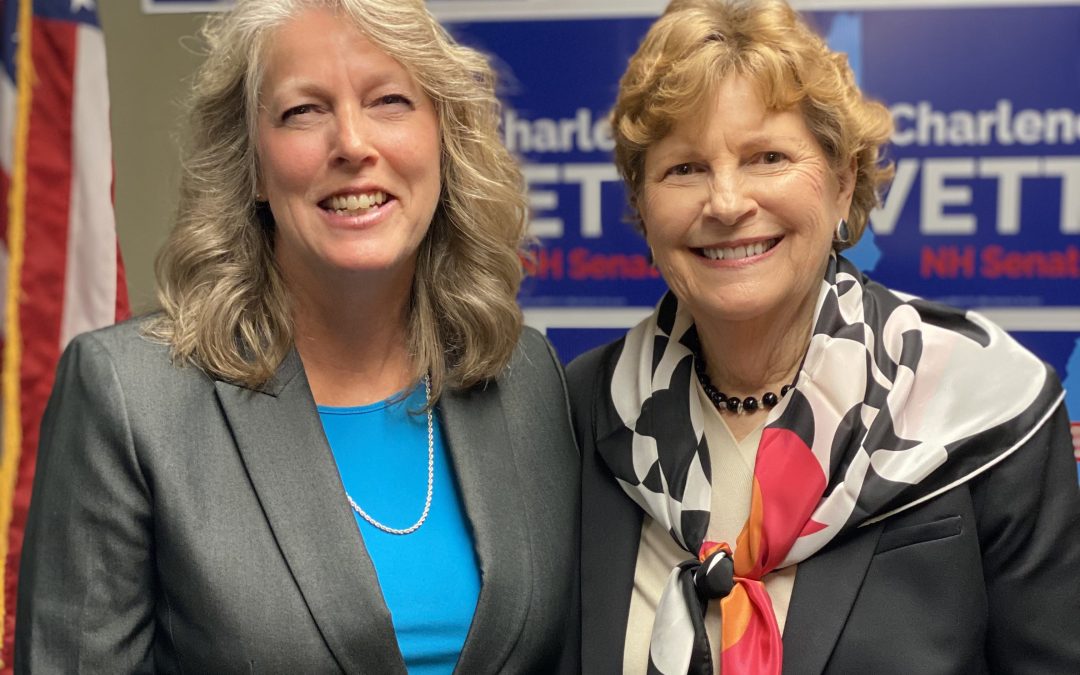 Senator Jeanne Shaheen visited Claremont on Friday, October 14 to endorse former Claremont Mayor Charlene Lovett in her race for New Hampshire Senate District 8. Shaheen stated: “Charlene Lovett has been a longtime advocate for Claremont and has fought to ensure that Sullivan County and its communities receive the attention and resources they deserve. Whether it is addressing childhood lead poisoning, pushing for greater public education funding or working to revitalize Claremont’s downtown, Charlene doesn’t shy away from difficult and complex issues. She will be a strong advocate for the people in Senate District 8, and I’m proud to support her candidacy for State Senate.”
Lovett responded: “I am truly honored to receive Senator Shaheen’s endorsement of my campaign. I have had the occasion to work with her as Mayor of Claremont on issues ranging from federal funding for infrastructure improvements to the impact of COVID-19 on childcare facilities and the need for financial assistance to keep them operational, building a pre-clearance facility in Montreal, Canada, in order to extend the Vermonter Rail Line to Montreal, and support for mental health & substance abuse programs in Sullivan County. Senator Shaheen is a well-respected leader who recognizes that I will be an effective state senator for Granite Staters.” Charlene Lovett is a 22-year Army veteran and the former Mayor of Claremont. Charlene was Mayor of Claremont (2016-21), City Councilor (2014-15), State Representative (2011-12), and Claremont School Board member (2009-12), and served in the military for 22 years, retiring as an Army Chief Warrant Officer in 2003. She has worked at all levels of government and will use her experience to build strong partnerships and develop policy that will benefit the communities and the people of Senate District 8 and New Hampshire.
Newly formed as the result of redistricting, Senate District 8 encompasses the City of Claremont and 19 towns in four different counties, including the towns of Acworth, Antrim, Bennington, Charlestown, Croydon, Deering, Dunbarton, Francestown, Gilsum, Langdon, Lempster, Marlow, Newport, Stoddard, Sunapee, Unity, Washington, Weare, and Windsor across the four counties of Cheshire, Hillsborough, Merrimack, and Sullivan.